“Taking One For The Team” has came out on 19th February. They’re back in Italy on 1st and 2nd March in Bologna and Milano, with two amazing sold out shows! They’re Simple Plan, and this is our interview with Jeff, in Milan. Check it out for something special about the new album and their relationships in the band! 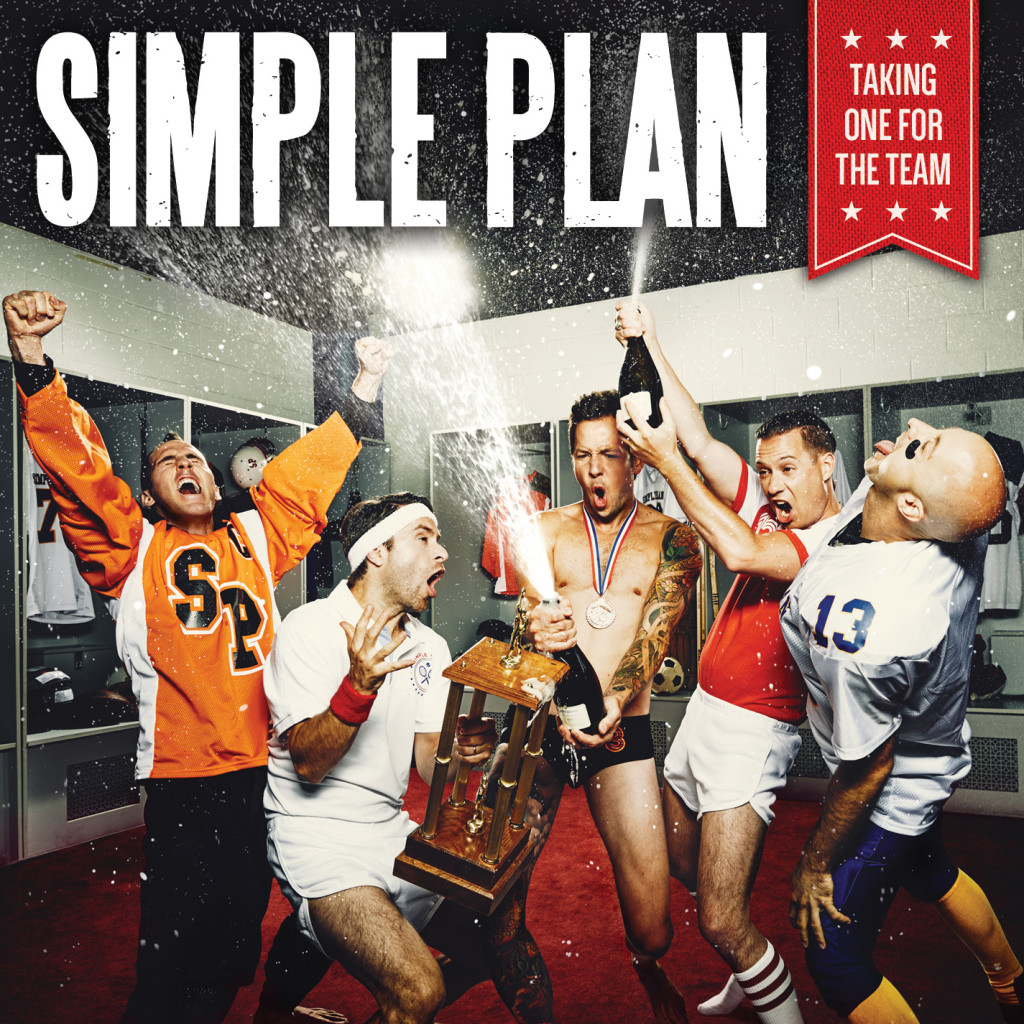 Hi guys! It’s a pleasure to have an interview with you!
Taking One for the Team is your fifth album. Was it more difficult to work on this album? Is it true that you guys moved into Chuck’s house during the making of the record?
Jeff: Yeah. When you’re in a band for a long time, you realize there are certain things that you did along the way that are better than others, and one thing we did that was really great on our first record was be together for the whole process: that builds a band, it creates the bond. These days with the internet it’s easy to just send files: you could be in Montréal or in Los Angeles, not to mention we all have a studio at home, so we can record tracks, but it’s not the same thing as Sebastien and I waking up in the morning, working on our guitar parts, and getting to the studio; there’s something special about that, it creates another mood, it’s more spontaneous, it’s more real. If I was in my place I would rethink and re-record and maybe make it amazing, but would it be better? It’s just different. We felt that human contact was important.
So was it hard to make this record? Yeah, it was hard.
I don’t think there was ever a record that was easy to make except for the second one: for the second one, we knew what we needed to do, we got in the studio, and we had a month and a half to do it because we were touring right after, so we had no choice but to finish it; then we went back on the road and that was it. So that was an easy record to make; the other ones were all difficult.
This time around what was difficult was finding our identity as a band in 2016; a lot of people are afraid of that, but you’re supposed to know, you’re supposed to know what you’re doing. And we’re human beings, we evolve, we listen to new music, to new bands. These days you could listen to Bieber and you could listen to death metal, and it’s compatible. When we started out, you liked pop punk and you didn’t listen to anything else, or if you did you didn’t say it. Bieber is a bad example because I don’t really know what he does, but there’s a lot of pop artists that I really love; it’s a balance of everything.
What was hard was finding that balance between the nostalgia for those two first records – people loved those records, that sound – and what Simple Plan could and wanted to do in 2016. So you have to bring back that nostalgia to 2016 and try new things without sounding too ‘alien’ to your fans, and that’s a hard balance to find.
You did it!
Jeff: Thank you. We used to hear all the time: “I loved your fourth record… but I prefer the first one.” We used to hear that all the time, but now people seem to find our latest album their favourite. That changes for me.

What’s your favourite song off the album at the moment?
Jeff: It changes, it really does.
I love Kiss Me, I think it’s a great track: there’s something really positive about it, there’s something light about that song, but it also has a second layer to it.
And I love Singing in the Rain as well. I think it’s probably the best written song we’ve ever had. I just love the positive message of it: whatever shit happens to me, I’m going to prevail, I’m going to be stronger; I think it’s a cool lyric.

Problem Child seems like a second part of Perfect.
Jeff: You’re right, that’s the way I see it too.
What about the lyrics and the birth of this song?
Jeff: I’m going to talk to you about Chuck’s perspective because I didn’t write that song.
Perfect is a personal song: it’s about what we all lived during that period. We were in school; me myself I was in music school, I was doing contests, I was winning contests, and I had a career as a soloist, a solo classical guitar player. At some point I had a band, that was my hobby, and that band was called Simple Plan, it was my weekend band; Sebastian was studying at university, he was setting to become an engineer, and his weekend band was Simple Plan; Chuck was in law school, and his weekend band was Simple Plan… Eventually the attention shifted, Simple Plan became bigger, more important, and we all had to tell our parents that we were not going to go to school any longer, we were going to become musicians, and it hurt them, our parents were disappointed, because as a parent you want the best for your kids and they thought being musicians wasn’t the best for us. So Perfect was about that.
Problem Child is more the story of Chuck’s brother, who took a long time to find his balance, his ground, and as a teenager, even as a young adult, he was reckless, and not necessarily super well in his skin. When Chuck brought that song we all felt that it was too personal, we all felt that it was really too much about one person, but then we realized it could have an appeal to more people than just Chuck.

You’re one of the few bands who have never changed the line up, even if your lives are so different. What’s your secret?
Jeff: Honesty. Truth. We talk a lot, we communicate well. I think that’s what it is.
We always say that it’s because we are from the same background, our families know each other, we went to the same high school, we were brought up in the same household, but the reality of it is, I think, we just have a desire, a wish to transcend our problems: when I have a problem with Chuck, or I have a problem with Pierre, within hours I’m going to discuss it with them, and we’re going to address it, and if we have to have a fight we’re going to have a fight, and then we’re going to fix it. That’s because we care about Simple Plan more than we care about ourselves. And this brings you to Taking One for the Team: how often do I feel like: “I don’t want to do this, I really don’t want to do this”? But then I’m like: “I’ll do it for the greater good, I’ll do it for the band, I’ll take one for the team.”

Which album represents you the most?
Jeff: All records are important, because they are big phases of our lives: when you make a record, and then you tour, that’s a chunk of three-four years of your life, so it’s big, it’s very important.
There are certain songs that I play live right now that are so powerful; when I play Your Love is a Lie I’m fucking angry, I’m really angry on stage.
So there’s that, and there are some songs that just make you feel good. Perfect World makes me feel good; it’s about how things are not perfect, but there’s a hope in that lyric. Another song that makes me feel good is Singing in the Rain: it’s about saying: “Fuck you, man. Things aren’t going well now, but I’ll prevail.”

How did you choose your setlist?
Jeff: I don’t know if you’ve noticed, but we shift certain songs within the set list now, there’s a rotation. That’s because we see fans that go through a lot of shows; here in Italy there’s a lot of fans who were in Bologna and who are here tonight, and we don’t want to bore them, we want to surprise them; we never tell which songs we’re going to do, sometimes new songs, sometimes older songs, we change it up; I think it’s just to keep the interest of the fans.
There’s a lot of fighting for the set list between us. There are certain songs that you have to play: you can’t not play I’d Do Anything, or Perfect, or Welcome to my Life, you have to have those songs in the set; but then, do you play Take my Hand or Your Love is a Lie? It’s not clear.
And with the new songs, we don’t know which ones are going to stand out yet; so do we play Perfectly Perfect now, or is it too early? Do we play Problem Child? We change it up, and next tour we’re going to change it all up again.

You have introduced a VIP ticket, and something has changed for your fan club – not all fans are happy about that. What do you think about it?
Jeff: Really? What I know is that nothing is changed for the fan club. You get in, you get the sound check. Basically for us the principle is that when you’re a fan, you love to see the sound check and meet the band.
What’s special for the VIP is that it allows us to have less people but to spend more time with them; the reality of it is that we have a lot of people to meet. The VIP adds one more thing for us: we have a pre-show now, we have the sound check, we have the show, and we still go outside and meet the fans afterwards. So it’s a big day for us, but those people have an exclusive experience with the band.
And if you want honesty, we don’t sell records anymore, nobody does, so if you want to stay on the road you have to think about a new way of doing things.

You’ll come back to Italy in May. Do you already know when?
Jeff:  We’ll be in Torino and in Roma, on May 16th and 17th. We might add another date, but we don’t know yet.