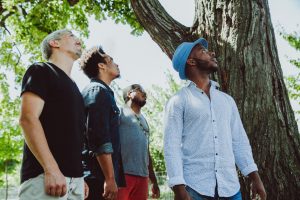 A Tree Grows are Brooklyn-based band. On March 17th was released their debut album called “Future Calculations” and this is our interview with them!

Thanks for speaking with us today Emanuel.

I realize that all the members in your band come from such diverse backgrounds – how did you all end up meeting and what led up to that critical moment when you decided you are formally a ‘band’?

Yes, what makes a group of musicians into a “band”? I think since making music is such a team effort, most musicians have a natural disposition towards grouping up, especially working musicians who perform a lot. We have to be good at rallying around a shared vision and we need to be able to contribute our talent and taste while still leaving room for the project to evolve on its own merit. The tipping point usually comes after a shared achievement, like a successful rehearsal of show. That’s when we started to say “we gotta do more of it” or “let’s make a record” or something of that nature. It’s an interesting moment when you find out that your band mates are equally enthusiastic and open to investing their time without an immediate reward or guaranteed income. It is a fascinating question, now that I think about it.

How did we meet and get started? In our case we set up a makeshift studio uptown in Harlem, in rashaan carters apartment, pooling our recording gear and then taping our rehearsals. First it was just Russell and Rashaan Carter and me, as a trio. We really worked so hard at orchestrating these compositions and then we brought in Tivon Pennicott to play saxophone. He is such an accomplished yet intuitive musician… and when we heard it all together we were like “boom – we’ve found it!”.

On March 17th you published your debut LP. How long did it tke you to achieve this goal and what was the concept behind this debut album?

It took us about 18 months from start to finish. A lot of that time was spent on the videos, the music only took about 6 months. Most of the members have a pretty busy touring schedule, especially Tivon – through his work in Gregory Porters band… so we had to wait for the schedules to align.

What was our concept.. well we used an unusual technique to guide us, which I have been utilizing for a few years: basically creating a little storyboard to bring everybody on the same page as to the purpose of each song. For this record we decided to play through certain moments of the evolution of life on earth: from the beginning of life as bacteria in the prehistoric ocean, to the appearance of animals with emotions, to the human experience of love, despair and so on. We are ending our story in the future where the thought process is machine like and algorithmic… so, that was what were trying to take into account while we play.

When it comes to your live performance, what would you say is your favourite part during a gig? What kind of feedback have you been getting from your audience when you showcase your music to them in a live setting?

The favorite part of a live show for me has to be the unexpected, the surprise. It happens on every great show where something comes off a little different from what you are expecting. It could happen from the first note – or just a certain moment where things align differently. When it happens in front of an audience there is a shared experience of creation rather than recreating what you have rehearsed before. I think the bands that are good at allowing for this moment of surprise are more engaging for the audience.

Your sound is pretty unique – what inspires you personally? Do you think your inspirations are much different than your band mates?

Great question! Yes, I think every artists or musician has such a unique inspiration . And the things that inspire you are evolving almost by the minute. Some guy in the band may get his inspiration from books, while the next person gets it from nature. Another could be inspired by social activism. Or a combinations of all. I have been around musicians for my whole life and no two people are alike in this regard.

My main inspiration this year came from science, visual arts… and from the unique condition of being a human on this planet, LOL..

Wow, I would prefer to have listeners pick three words, since I a am not exactly objective. Some words that I would want to associate with the music would be: real, simple, mysterious

Do you have any plans in the next year? Are you planning an European tour?

We are working mostly in New York at the moment and have not planned a tour. It would be great to come to Europe!