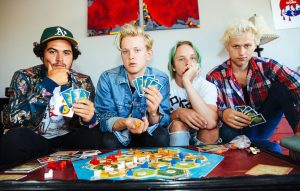 A lot of names for just one band, but finally they’ve reached what they want. SWMRS are an American rock band that is more than just the band where Billie Joe Armstrong’s son play. We met them at their concert with All time low, in Milan, and they told us a little bit about their band!

Hi guys! First question: you’ve changed a lot of names. Why, and how did you choose this one?

Hi! When you’re young, you can never reinvent yourself enough times. That’s how you know you’re trying to grow. We kept changing our name because we kept growing and growing out of our old names. We finally got to a point where we liked what we were doing.

Your sound is very personal, even if you’re very young. How did you find it?

When you play in a band with your best friends, there’s not something that you try to do, you just do it. We listen to a lot of the same music, a lot of emotional music, a lot of music that has depth of emotion to it. When we write songs we’re always trying to speak some significant truth about emotion.

Joey’s father is one of the most important rock stars out there, and you’ve worked with him. Can you tell us about that? Do you feel his influence?

As you said, he’s one of the most influential rock stars of all time, so it’s hard to avoid his influence. It’s cool to have him for advice, and he’s just a fun guy to hang out with.

What about being on tour with All Time Low? Do you have any funny stories?

Well, Jack leaves us special notes every day in our green room, he writes us little messages. We probably shouldn’t repeat them though!

What are your future plans?

We’re going on tour in the summer in the US with All Time Low again, but we’re coming back here in September. We’ll just keep playing music, and hopefully come out with a new album soon.

This is your first time in Italy. What do you expect from our country?

Last question: if you had to describe your band with the name of a drink, what would it be?