Back to 2015 when we  realised a report of As It Is first album “Never Happy, Ever After“, we can say with certainty that they’ve come a long way since then. Two album after and a lot of live shows, we met them at InFest in Milano and we had a talk with Patty and Ben who talked about the last album, the new entry Ronnie and also something new for the band! 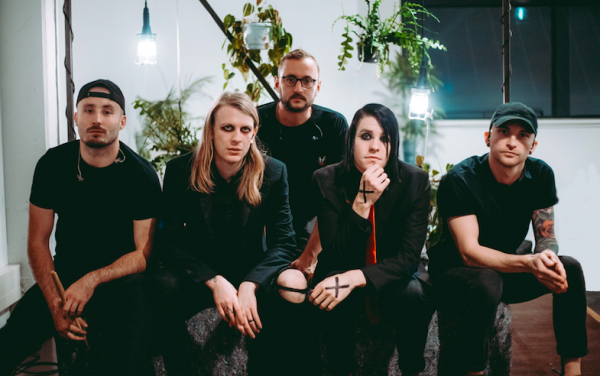 In your latest record “The Great Depression” you’ve talked about mental illness: why the choice to dedicate an entire record to this?

Patty: “There are a few reasons, first and foremost, it was the record we’re supposed to make, a record we wanted to make. Secondly, we released an album called “okay.” that talked very unashamedly and vulnerably about our respective mental healths and the feedback was overwhelmingly positive and welcoming of this conversations but it was also difficult to listen to so many very serious and heavy stories about lost and struggle and mental health. And it was kinda of… in a big way was our response but it was also… we felt that there was a avoid in the music scene of people who were talking about mental health yes but not talking about it and well, we believe this was the best way to talked about it… mental health and mental illness are beautiful but they’re also ugly, they just come with being alive, being an imperfect person.     As It Is

Related to your latest record, you’ve changed a lot your look. During the shows you wear a sort of uniform: why this choice?

Ben: “I think we’ve always been really influenced by mid 2000 emo’s and that was those of the bands that talked about mental health when we were growing up and a part of it was pain, most of it… and a part of it is just self expression and as finding ways that we like to dress, to make up… whatever it is and it’s just a combination of these things and it just felt really fitting with the album and also I just… we didn’t really wanna be like a safe band… we like being shock, I think we wanna the band’s people expected to maybe look and sound what we do now.”

This year you officially added Ronnie into the band. Why have you decide to add a new member to your line-up and what is changed for your live shows?

Patty: “Well, when we needed a lead guitar, Ronnie was probably the only person we consider and the first person we asked to. Ronnie hadn’t play guitar in about 5 years, he only played rythm guitar so he was surprised.”
Ben: “He was at a point in his life when he wouldn’t be a musician again even if I think he has been in a band before. We’ve waited for a long time before he joined.”
Patty: “On and off stage he has such a loud presence, that we and I think everybody that comes to see this band can just feel day to day and he’s a very special person, he brings so much to the band, he brings so much to the shows and so much more behind the scenes too.” As It Is
Ben: “Yeah, so much positivity we can be guilty of no having on ourselfs. It’s nice to have a positive person in the band.”

Do you guys already have any ideas for the new album? Are you working on it?

Patty: “We have ideas. We’re looking for to writing and find a conceptualizing the new album and the next kind of chapter and era of the band. But for now we’re just working on the re imagine the EP’s, so we’ve released two or four and we have two more coming. Just re imagining the entirety of “The Great Depression” from front to back and we’ve done a couple of covers, remixes. We remixed “The Wounded World”. We’ve been putting out tons of stuff but we haven’t started conceptualizing or writing the new record but we know there will be a fourth record… for a long time we didn’t know there will be a fourth record so that’s nice to know there will be one.” As It Is

How do you see yourself at 80 years? You think you’ll still play music?

Patty: “I hope so, if it’s what we love doing I hope so. We do this ‘cause we really love it. We get to travel the world; and we get to meet amazing people and it’s not always the most able way to spend your life, you miss a lot of things. Being away from home six to ten months of the year.
Ben: “I have a like love/hate relationship with bands are still playing at 80 years because you go to see it and it’s not the same and I’d like to think we’re like… what’s the phrase? “Better to burn out than fade away“. Who knows? We’re just taking one day at time, one album at time.”

Last question: if you had to describe your band with a name of a drink, what would it be and why?

Patty: “Coffee? It’s a great question.”
Ben: “Half black Americano and half some ridicolous alcholic…
Half coffee Pàtron Tequila like black Tequila… so mainly just dark black drinks.”
We really hope to see really soon the guys back to Italy. Their shows are so powerful and there’s such a special connections with their fans!