The already very busy lineup of the Rock for People festival has grown with more big names. After Easter, the organizers are coming up with a musical gift in the form of 24 newly announced world stars. 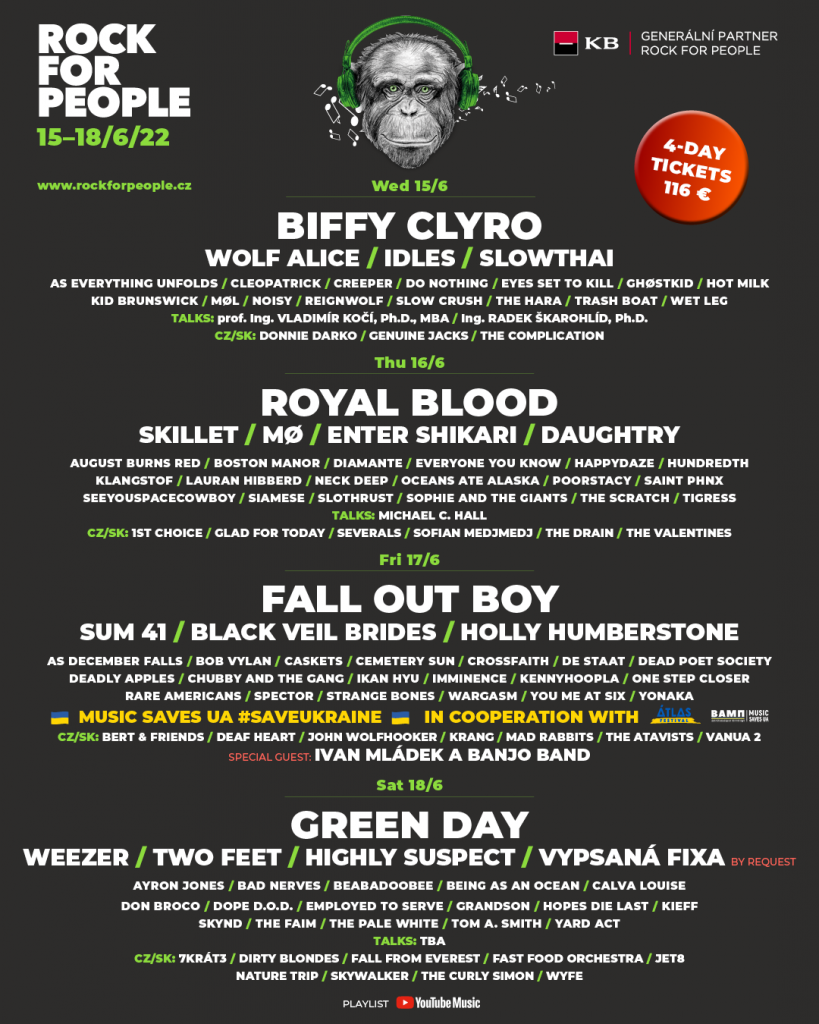 The Rock for People lineup is growing

In addition to headliners Green Day, Biffy Clyro, Fall Out Boy and Royal Blood, one of the best live bands of today, electro-hardcore Enter Shikari, American rockers Daughtry and Highly Suspect, and British rising star Holly Humberstone, who won this year’s Critics’ Choice Award at the BRIT Awards, will perform in Hradec Kralove on 15-18 June. Fans can also look forward to one of the most in-demand bands of the moment, the UK’s Wet Leg, who shot to the top of the charts last year with their hit Chaise Longue.

The organizers point out that the overall lineup is still not complete.

A new feature of this year’s event is the discussion stage, where interesting debates and lectures will take place. An exclusive guest will be the American actor Michael C. Hall, star of Dexter and David Bowie’s musical Lazarus. A varied non-musical programme (theatre, dance, stand up…) is still to be announced.

The capacity of the festival is almost sold out, with the last 2,000 tickets remaining.

General four-day tickets are on sale at GoOut.net for 116 EUR:
https://rockforpeople.cz/en/vstupenky/?menuTickets=true

Almost everyone will enjoy the festival. Fans of mosh pits will appreciate performers such as IDLES, slowthai, KennyHoopla, or August Burns Red, while rock stars will include Sum 41, Skillet, Weezer, You Me At Six, Black Veil Brides and Don Broco. The alternative scene will be represented by Wolf Alice, beabadoobee and the RfP stage will also be covered by pop stars MØ and Two Feet. In addition to the music programme, the 26th edition of the festival will offer a wide range of accompanying activities in the unique airport area – lectures, workshops, theatre, film screenings, sports activities and more.